hey guys!  last time we talked, i gave you a brief life update on life, baby, and weight loss. today is going to be very BABY focused!

so tuesday afternoon, we headed to a 3rd party ultrasound facility to get a gender scan and 3D/4D ultrasound.  we announced before that we wanted the gender to be a secret, so the tech found out the sex privately, then turned on the screen to let us see our sweet little baby!  the ultrasound lasted about 10 minutes and baby wasn’t very active and seemed to be sleeping, so it wasn’t very eventful!

we handed the envelope, sealed by the facility, to barbara’s friend, and from there she planned a small gender reveal party based on the what was in the envelope!

here’s a quick background on me.  I HATE SURPRISES.  like, barbara has rarely gotten a gift on christmas, because i always make her open them early.  so this two days was TORTURE.

we were totally sure torin was a boy.  barbara had a dream and i had a hunch.  even a girl at barbara’s office, who has never guessed a gender wrong, guessed boy.  WE WERE CONVINCED!

so, thursday rolled around, nothing was achieved at work because all i could think of was the balloons flying out of the box, and then we arrived at the location to get some pictures taken by a friend.  they turned out amazing and i cannot wait to see the entire set!  at 7:30pm, everyone had arrived, so we quickly took the ‘team pink’ and ‘team blue’ photos, then opened the box.  this is where i got a very strong feeling.. as soon as i started to rip back the tape on the box, i KNEW the balloons were going to be PINK. and guess what, THEY WERE!  so, thursday night, we were able to announce the arrival of Torin Kenley Mullins. 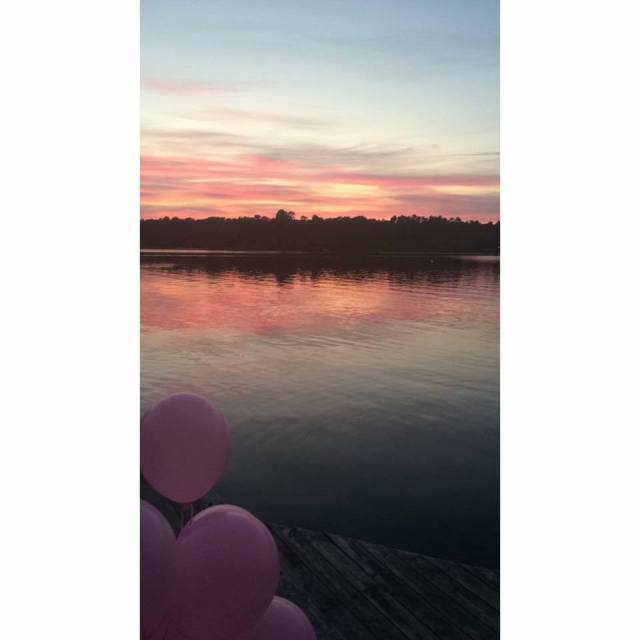 torin was a name we’ve loved for YEARS.  we were watching winter x-games, and a men’s skier came on with the name torin.  we both fell in love and knew that it would be our first child’s name, regardless of gender.  we think girls with masculine or just gender-neutral names are the cutest, so it worked out great.  kenley, is derived from kenneth, barbara’s dad’s middle name.  he’s doing a great job at battling stage 4 prostate and bone cancer and we knew he deserved a little tribute. THEN, on the way to dinner that night, barbara mentioned maybe adding a 2nd middle name.. she has 2 middle names “anne” and “jacqueline”  and wanted to be able to show her mom a tribute, so we added “annette” , her mom’s middle name, to torin kenley.  SO, our sweet baby’s name is torin kenley annette mullins.  i think for the most part, she will just be torin and torin kenley when i yell at her as she gets older and into things 🙂

we knew if we were going to have a girl, we wanted pink and sparkles and all that jazz.  now it was just narrowing down how to mesh all that together.  after a quick search into pinterest, i found our colors: pink, peach, gold, and sea foam.  on top of that, i wanted to keep some gray in the room and add some floral.

after we narrowed down the colors, a few quick pinterest searches later, i found some room inspirations i could play off of!

love the tassels and floral above. (source)

love the gold decals on the gray wall above.  (the link was broken on pinterest, so no source) 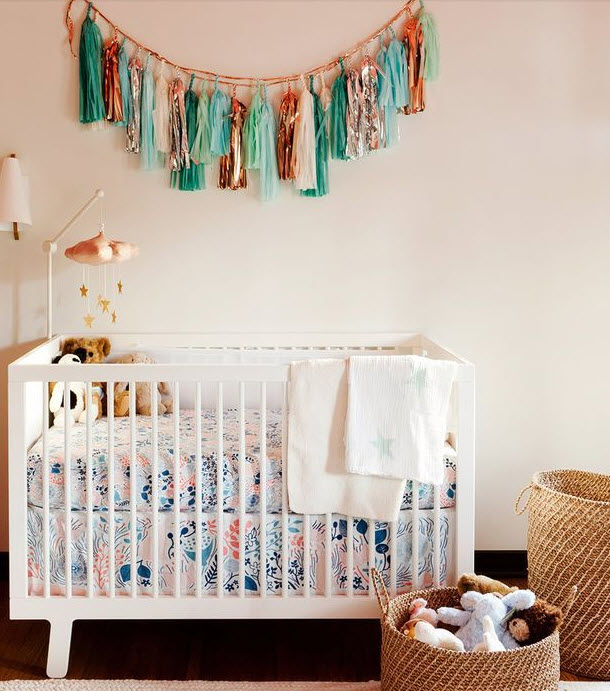 love the modern crib and teal/blue tassels. (the link was broken on pinterest, so no source)

we knew what crib we wanted thanks to young house love and their researched back in the day. luckily, the crib they bought was still available at walmart, and the price was too good to be true.  we also wanted a simple, clean, white dresser to go with it, so we decided with ikea.  we have the same dresser in our guest bedroom, in gray, so it was an easy decision.

so we had an even BETTER idea of what we wanted at this point.  then it was time to create some kind of inspiration/mood board that we could piece things together to see if they meshed well.  so, here are a few fabric combinations i found via etsy:

and here are a few accessories i thought would mix well with everything:

so, that’s where my head is going with the nursery.  first thing we have to do it rip up and replace the carpet in the room and rip up the carpert in the hallway and put wood floors down.  the previous owner’s dog wreaked HAVOC on the carpet upstairs.  we also want to change out the ceiling fan with something a little more modern and replace the fire detector with a new Nest one.  yikes, so much to do before january!  i know once we have everything, it’ll come together quick, but its rounding everything up and getting those floors laid and walls painted!

a few people had mentioned a ‘virtual baby shower’ and i talked it over with barbara.  we’re overwhelmed with the amount of support we’ve received with this sweet little baby and have decided to try it out!  i’m going to open up a PO Box and will post about all the stuff later in the year.  it’s seriously amazing to see how much people want to support us, and it doesn’t go unnoticed, that’s for sure!

hope everyone has a great week!  mine’s going to be crazy, so i’m enjoying the slow time, now!